Danced Zikr, often in a circle or in a contained space of participants, has ancient roots and continues to be practiced in many countries, from Chechnya, through Turkey, Iran, Arab countries and on into Africa. 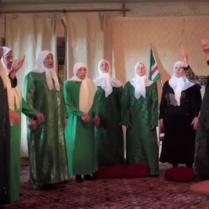 In New Zealand, Danced Zikr is generally practiced in a form that has evolved from the inspiration and transmission of Murshid Samuel Lewis, a direct initiate of Hazrat Inayat Khan, in the late 1960s. However the old roots are entirely apparent in this more recent manifestation.

Pir Zia describes Zikr as a “profoundly sacred practice”. It involves, for Sufis at least, a concentration of purification, effacement and invocation of the Divine as Presence. Danced Zikr is not an exception. It is essentially deeply inward in its nature, even if it can, at times and at certain stages in a zikr session, have a powerful outward celebratory aspect as well.

New Zealand Danced Zikr most commonly involves men and women in a circle holding hands and singing a mantric phrase while making simple movements in unison. The Zikr leader will direct the circle in any number of ways including changing the phrase, melody, speed, loudness, movements, requesting male or female voices or going “on the breath”.

It is absolutely not necessary to be a good singer or dancer in order to participate in and enjoy danced zikr. All it needs is an open heart – and if your heart is not open, try it anyway, it most probably will be by the time you have finished.

The basic Danced Zikr form can be varied very considerably and to real benefit for the right participants. To give some examples:

Exploring these variations, especially practicing alone or in very small groups, can considerably help in developing the depth of engagement which is central to the intention of Sufi Zikr practice.